The chart below is from GHS strings, but I have no personal
preference in the brand of strings that I use on my musical instruments. 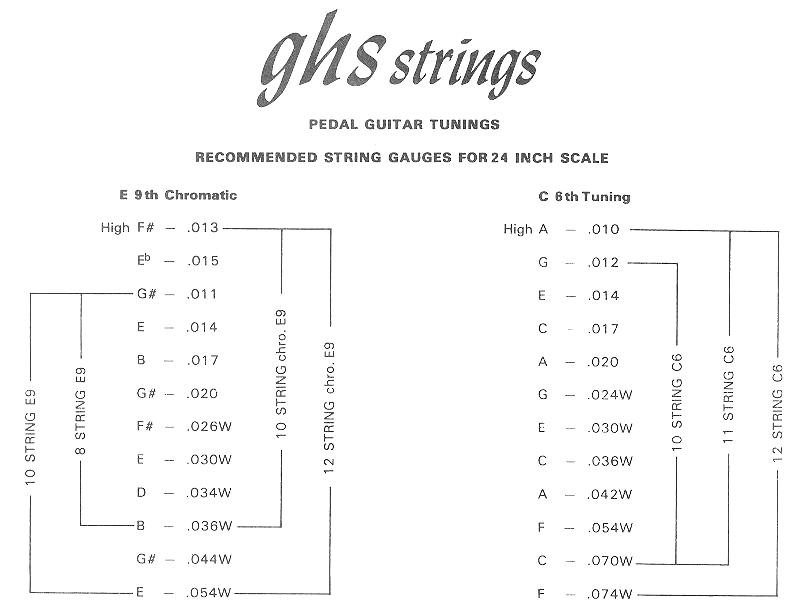 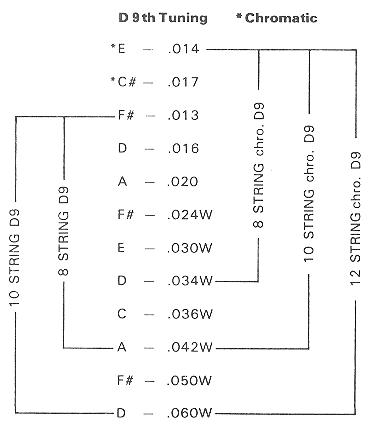 * Where indicated by an asterisk symbol, either wound or plain strings can be used. I prefer a wounded string when given an option. I also prefer semi-flats on all my non-pedal steel guitars. Flat wound strings aren't as vibrant and responsive as round wounds, so semi-flats are a nice compromise in between. But truthfully, if you've never tried flat wounds, why not give it a try to see for yourself? They are nice, I admit, and I still use them on my Jerry Byrd 8 string short-scale Frypan (simply because they last forever and I've never felt like changing them. They aren't as bad as you might think. They are a bit more muffled, but it's not real noticeable. Round wounds are more noisy, obviously, when sliding the bar. The top strings on ALL GUITARS are plain steel anyway, so when considering round or flat wound, we're only talking about the bottom few strings of your steel guitar. I think the semi-flat wounds are real nice.

Dunlop .018" Mini Brass Finger Picks (Amazon.com)
(I love these mini brass picks! I use the .0225 gauge, which are a bit stiffer to bend. I like the shiny brass look.
I have always hated larger picks that don't fit my fingers. These picks are perfect! Very nice!)

Beloved steel guitar legend, Jerry Byrd (1920-2005), said he preferred to use a .016" string for his top E string. Jerry liked the tone obtained from using a slightly thicker gauge string. It is normally recommended to use between a .013" to a .015" gauge string for a high E note. This works fine for me unless I try to raise that .016" string to a G note, which I sometimes like on top, as Bobby Ingano uses. I have to use no thicker than .014" for a G note. It all boils down to personal preference on string sizes.

Also, on my Pro II Sho-Bud pedal steel guitar, I use a .022w (wound) for the 6th string on the E9th neck. I learned this from Lloyd Green, who says he likes the sound that a .022" wound string produces. However, the wound string doesn't work with my split-tuner on my Rittenberry S-10. If memory serves me correct, the string won't go low enough. So I have to use a plain .022" like Tommy White uses on his guitar. I love both of my steels, but I wanted to mention this quirk about using a plain or wound on the 6th string (i.e., G#). So I use a wound string when I can.

Nickel strings last longer, not as susceptible to rust from humidity, but stainless steel is brighter (which is my preference). Many steel artists prefer stainless steel strings on the E9th, and nickel on the C6th neck. I tend to agree, but I can happily use either of them. I find that adjusting the amplifier can usually give me the tone I'm looking for. Everything from the size of the room, guitar make, pickup type, amplifier type and make, to the way I feel at any given moment, affects the sound that I perceive to hear.

As a general rule, a thicker string gauge will produce a sweeter tone. This is why Jerry Byrd used a .016" instead of a .013" to .015" on his top E string. When I first bought my Pro-II Sho-Bud in the 1990's, the guy who owned it didn't know how to use the knee levers or pedals. So he put these really heavy gauge strings on the steel and played it like a non-pedal steel. I still remember the day I went to buy it from him in Richmond, Indiana. He was playing Steel Guitar Rag at a private lodge that he belonged to. I think that may have been the only song he knew, but he could really play it well!

So when I bought it from him, he didn't tell me about the strings (I don't think he knew to be honest) and I played it as it was, with the heavy gauge strings on it. Wow, what a beautiful sound!!! However, my pedals were very tight to press down. I was relatively new to playing steel guitar and didn't know any better. When I decided to go ahead and change my strings, the pedals played like butter. What a big difference! Unfortunately, that sweet awesome tone was also GONE! So you may desire to do a little experimenting on your steel guitar. If your pedals are too tight, you might want to go a little thinner on the string gauges (or vise versa). Of course, by doing so you will need to make some adjustments to your raises and lowers, with the hex nut tuners.

The legendary Jimmy Day (1934-1999) recorded his famous Steel & Strings album by detuning his Sho-Bud down to a D9th instead of an E9th. Wow, what a difference it made in the tone! Beautiful, in a word! I once tried to do this on my pedal steel, but stopped, because I would have needed to make some mechanical alterations to accommodate the lower tuning. But if you tinker with the string gauges, and have the time and patience, it is well worth the effort.

That is one of the reasons why Herb Remington's (1926-2018) recordings are so sweet, because he used the A6th instead of the C6th, which is three half tones lower in pitch. It really makes a big difference in the sweetness of the tone. I have always enjoyed the A6th tuning.

Granted, the industry has advanced incredibly over the past 50 years and everything is set the way it is for a good reason. Proper string gauges are intended to provide the best playability, performance and fun for the musicians. I'm simply sharing a little known fact with you, that